A visit to Taos Pueblo is a visit to the only living Native American community designated both a World Heritage Site by UNESCO and a National Historic Landmark. The multistory adobe buildings, located 3 miles northeast of Taos Plaza, have been continuously inhabited for over 1000 years. Archaeologists say that ancestors of the Taos Natives lived in this valley long before Columbus “discovered” America and hundreds of years before Europe emerged from the Dark Ages. The main part of the present buildings were most likely constructed between 1000 and 1450 C.E. and appeared much as they do today when the first Spanish explorers arrived in Northern New Mexico in 1540. (The Spanish believed that the Pueblo was one of the fabled golden cities of Cibola.) The two structures called Hlauuma (North House) and Hlaukwima (South House) are said to be of similar age and are considered to be the oldest continuously inhabited communities in the United States.

Taos Pueblo, like many ancient dwellings, is actually many individual homes, built side by side and in layers with common walls but no connecting doorways. In earlier days, there were no doors or windows, and entry was gained only from the top with ladders extending down into the living quarters. Taos Pueblo is made entirely of adobe—earth mixed with water and straw then either poured into forms or made into sun-dried bricks. Many of the walls are several feet thick. The roofs of each of the five stories are supported by vigas—large timbers hauled down from the mountain forests. On top of the vigas, smaller pieces of wood—pine or aspen latillas—are placed side by side, and the whole roof is covered with packed dirt. The outside surfaces of the Pueblo are continuously maintained by replastering with thin layers of mud. Interior walls are carefully coated with thin washes of white earth to keep them clean and bright―hopefully for another thousand years! 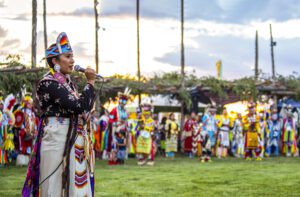