The community includes more than 300 acres of shared land, and is fully off the grid, using solar and wind power exclusively. Some of the homes, such as the Phoenix, can be rented out by the night. Greater World is very much a work in progress, with a projected 20-year plan to reach completion.

A graduate of the University of Cincinnati, he departed from traditional architectural protocols with the inclusion of bio-ecological features into his designs, building a house, incorporating garbage – in the pre-recycling days of 1971.

Reynolds, who maintains that “there was no ‘garbage’ until modern man,” rebelled against the restrictive ideology of his profession by wiring soft drink and beer cans together to form bricks, and using them to construct his home.

Over the following decades, his designs continued to evolve, incorporating thermal mass, passive solar energy and natural ventilation in order to respect the environment and to counteract climate change thorough architecture.

The resulting project was the Earthship we know today; a self-sufficient dwelling built with natural and recycled materials with energy conservation in mind. Designed to produce water, electricity, and food for its own use, Earthships are defined by six basic design principles, all of which take advantage of the existing natural phenomena of the earth: building with natural and repurposed materials, using thermal and solar heating and cooling, solar- and wind-generated electricity, water harvesting, contained sewage treatment and self-sustained food production.

As one nears the community, the first impression for most visitors is that they don’t seem real and that’s if you notice them at all. Coming from the south you may see the sunlight bouncing off windows and some undulating, futuristic forms but when approaching from the north, the structures disappear into the bermed earth from which they’re made, leaving only a small windmill or a turret to signal their existence.

They truly are Earthships; Reynolds’ unique architectural creation that draws simultaneously from the past while envisioning the future. Located in this equally unique community on the high desert plain of Tres Piedras, about thirty minutes from Taos, with an influence that has reached around the world.

Most of the Earthships are single-story structures; long and narrow, with one side generally built into a hill and the other side constructed of glass, with plants often occupying the space between the two walls. Many have whimsical turrets or towers attached, but others are quite simple. Their common denominator is that they were and are, constructed by the homeowners themselves, reflecting their personal style.

Their Hobbit – meets – Blade Runner exteriors aside, many of the interiors of these homes will surprise you with their cosmopolitan sophistication.

To get there, make a right off of Route 64 just west of the Rio Grande Gorge Bridge. You can take a small self-guided tour with limited access, however for the full tour that includes seeing the interiors of several Earthships, you can book online in advance.

For much more information about the Earthship community in Taos, booking a tour or signing up for the Academy, where you can learn how to build your own Earthship, please visit the sites linked below. 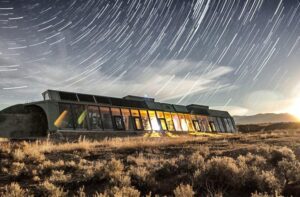 The architecturally revolutionary Earthships provide a way forward in a time of climate change and unpredictability of resources.