Taos is located high in the Sangre de Cristo mountains in Northern New Mexico. The semi-arid climate of this small southwestern town means mostly clear skies, hot summer days, cool summer nights, freezing temperatures during the winter, and plenty of snow from November to February. For centuries snow has played a crucial role in the survival of the local people of Taos. The snowpack at the end of each winter season contributes to the local watershed, which is the primary source for irrigating local farm land. The water that flows from these streams high in the mountains becomes a water vascular system of ditches that are known as acequias. While visiting Taos, you will frequently hear or see the phrase ‘agua es vida’ or ‘water is life’.

In order to farm the sprawling high desert and lands of Taos, Hispanic subsistence farmers developed a complex irrigation network of acequias that weave their way through the community to provide water for local farmers and residents. While the term acequia is of Moorish/Spanish origins, transporting water through a network of ditches was part of the Pueblo culture before the Spaniards colonized New Mexico in 1598.

Beyond simply transporting water from the streams and rivers, the acequia network of Taos is a democratic institution that is in fact the oldest form of local government in the United States. With such a complex system of water distribution, which allowed locals to survive and thrive in the region, a democratic governing body was created to provide balance and control to individual irrigators. At the heart of the larger network of acequias throughout New Mexico is a democratically elected commission that is responsible for decisions that maintain and operate the acequia. Each individual on an acequia with water rights (or Derecho) is known as a parciante and each parciante has rights and duties when it comes to the community that shares the water from it’s acequia. Between the commission and the parciante there is a day-to-day caretaker of the acequia known as a mayordomo. While there are many acequias in Taos, most of them are fed from a limited watershed, and fair distribution of water is managed by the mayordomo and is directed by the commission. Decisions related to the acequias of Taos impacted the daily life of local farmers, and the distribution of water in an arid environment meant the difference between life and death for centuries. In Taos, Agua es Vida.

During your visit in Taos, you will notice small acequias running throughout the community. Take a minute to appreciate what these small ditches mean to the culture of Taos and think about how, over the centuries, they have shaped this beautiful valley. 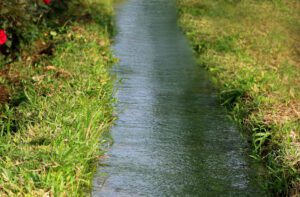 The long-range vision of an art nonprofit, The Paseo Project, to preserve the acequia system in downtown Taos through art installation and education.