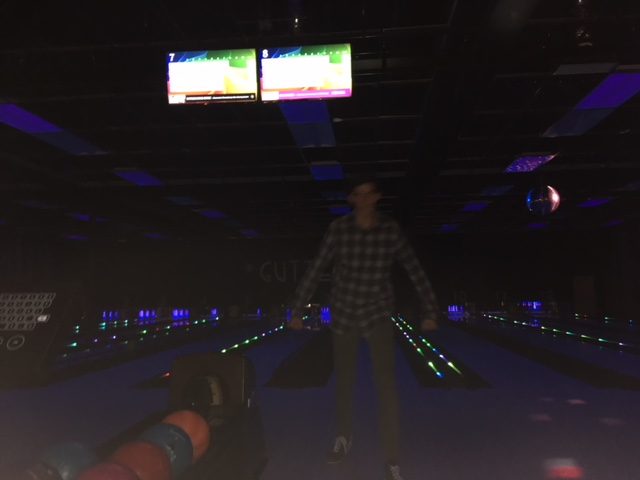 Gutter Ball: When the bowling ball enters the gutter from the lane.

There’s a whole lingo around bowling and you’re gonna have to learn it fast, if you’re going to Gutters.

Apparently there’s a lingo around getting good service too, but we’ll try to be patient while they get the glitches out and cut them some slack, as the night our “reviewer” went, it was slammed. Holidays slammed.

Taos’ new bowling alley held a soft opening the day after Christmas, and it’s been jammin’ ever since. They’ll have their Grand Opening next Saturday, January 6th. I’m not a big bowling fan plus I don’t eat pizza, so I did not go, but heard it was great fun, and great food!

I had run into one of the owners, Johnny Long, a week or so prior, and he said everything was ready to go once all the red tape was squared away. He was excited about this venture, in partnership with Shelly Ratigan former owner of the Northside Spa, Dena Minato and Dave Kullowatz. 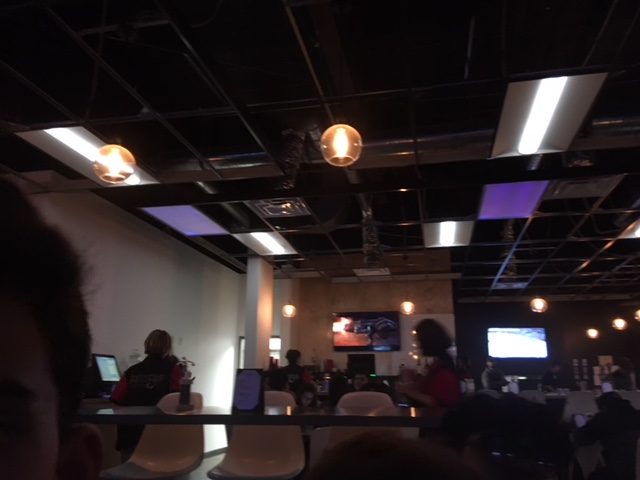 Johnny is Debbie Long’s brother and they are both just insanely talented and creative thanks to their authentic Bohemian genes. I’ll be visiting Debbie again soon, but meanwhile Johnny has been keeping me up on this venture whenever I run into him. At the World Cup, or Salon X and Cid’s, of course, where you run into everyone. Johnny’s day job is that of an actual, working actor. A rarity in Hollywood, let alone Taos. But they do exist, and what’s more, they seem to like it here.

“We’re a week away from opening.” He’d told me at the time.

With beer and wine and brick oven pizza, along with live entertainment and other events planned, Gutters is going to be a fantastic addition to Taos. The state of the art, 12-lane alley is outfitted with display monitors to help bowlers keep score with a user-friendly system for each lane, and its clean, retro modern design, perfectly complements the sport itself.

This past weekend, my granddaughter, Natalya informed me she was going that evening with a few friends to eat and bowl and just “check it out.” 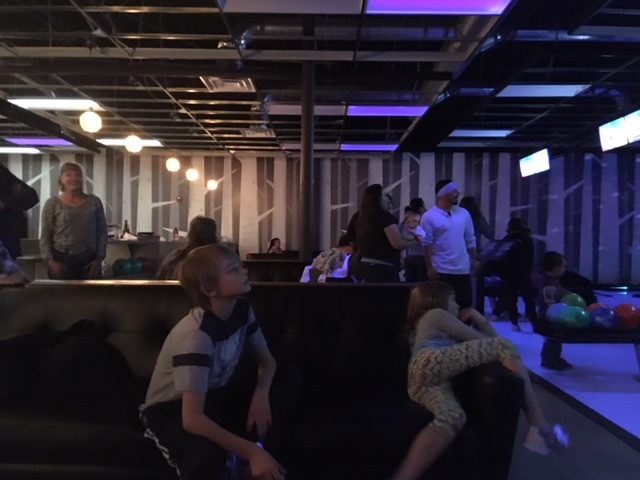 Natalya is 14, a Freshman at Taos High. She’s as cool as they come and I jumped on the opportunity to have her snap a few pics (something she actually likes to do), and tell me a little about her experience there.

“I’ll see what I can do,” she told me (on Snapchat where we have most of our conversations),sounding exactly like her mother, my daughter Angelica.

Fine, I thought. If she does, great, if not I’ll just have to go check it out myself.

No need. I awoke yesterday morning to these images.

I sent her a chat thanking her. “How was it, did you have fun?”

“Yeah it was nice, it was packed.” 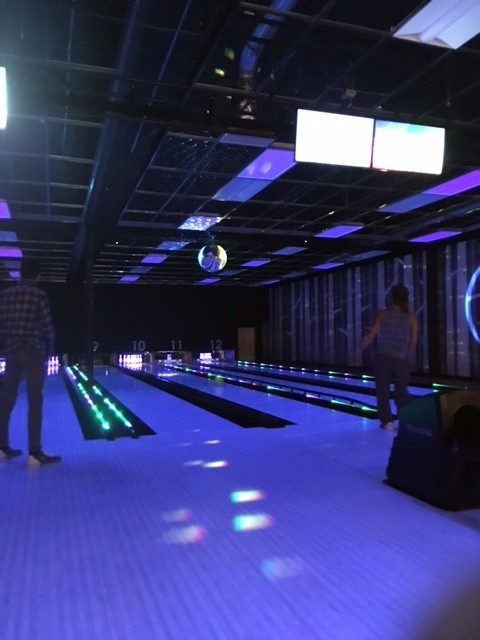 “We didn’t eat there because the service sucked.”

Getting anything out of Natalya is like trying to get blood from a rock but if she thought the service sucked, it probably sucked. This particular 14-year-old grew up in the restaurant business. Her dad is a talented chef.

“What happened?” I pried.

I was curious. The Taos News had reported that “Guests praised the service on the soft opening, saying the service and food was great and they planned to be back.”

“We asked at the front for food and they said they’d send a server our way and never did.”

“Did you complain?” I asked.

“They were slammed.” See I told you, she grew up in the biz. Any other kid would have been harassing the wait staff pronto. 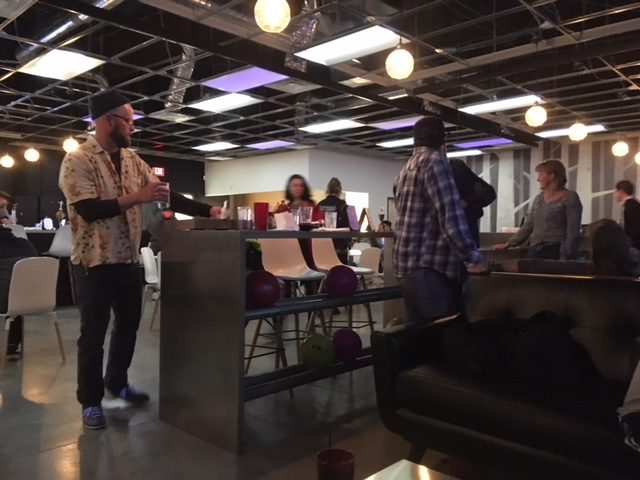 “Did you get sodas, how many of you were there?

I get that this was a table of teenagers out alone, but for the wait staff to assume they were not going to eat (ie. spend money), and to ignore them the entire time they were there, (an hour), is a bit inexcusable.

Hopefully they will up their floor game as soon as things slow down a bit. The local teenagers might prove to be among their best customers in months to come, especially during the slow times, when tourism traditionally comes to a standstill in Taos.

Natalya wanted to be clear that in spite of the lack of food (service), she and her friends had enjoyed themselves.

I asked if I could share what she’d told me and she said, “okay.”

“But don’t be too mean.” She advised me, “they are new and it was the busiest weekend.’ 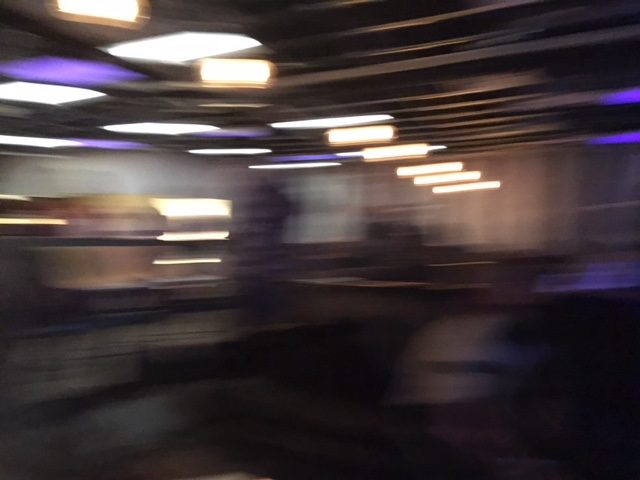 If you’re at loose ends today (Happy New Year!) it might be a fine time to try your hand at bowling.

And, I hear the pizza is stellar if you can get your hands on some!

For more on Gutters (and a link to the lingo), please visit the sites linked below.

All images taken by Natalya Quintanilla on her iphone

As if getting ready for the biggest Paseo yet were not enough to chew on, the Paseo peeps have loaded… Read more »

Soak up every last second of summer in Taos, New Mexico. Whether you’re in the mood to move or groove, this is the place to do it.