There are as many similarities as differences between the first two waves of artists that came to Taos in the early 20th century. Both were drawn by the special combination of physical beauty and spiritual and cultural richness that Taos offers, as well as a desire to be somewhere truly “different.” But the ways in which the two groups—the earlier Taos Society of Artists and the later Taos Moderns—interpreted and expressed those attributes in their art couldn’t have been more different.

The work of the Taos Society of Artists, founded in 1915, was the essence of southwest romanticism, including faithful representations of New Mexico’s landscapes and portraits of people from Taos Pueblo. The Taos Moderns created work that was abstract, distilling the essence of the southwest through their personal experiences and styles. They transformed the art of Taos from something regional, illustrative of a very specific time and place, into something full of international influence, individual sensibility, and evolving style.

It’s difficult to say exactly when the period of the Taos Moderns began. The groundwork was laid in the 1920s and 1930s when Mabel Dodge Lujan brought artists like Georgia O’Keeffe, Dorothy Brett, and Andrew Dasburg to Taos, and the style of some of the Taos “originals,” like Ernest Blumenschein and Victor Higgins, began to incorporate more modernist elements. Dasburg, who moved permanently to Taos in the 1930s, was a teacher, known for pushing his students toward abstract work, and several Taos Moderns, like Cady Wells and Agnes Martin, studied with him.

Modernism as a movement truly began to take hold in Taos in the mid-1940s with the end of World War II and the introduction of the GI Bill. A number of artists funded by this bill came to Taos to study at the University of New Mexico Summer Field School of Art and the Taos Valley Art School, founded by Taos Modern Louis Ribak. These schools brought artists like Earl Stroh, Cliff and Barbara Harmon, Malcolm Brown, and Oli Sihvonen to Taos. Still more artists came with the support of the Helene Wurlitzer Foundation, established in 1954 and still a force on the Taos creative scene today.

The Taos Moderns were not an official association like the earlier Taos Society of Artists, and they represented a diversity of styles from cubism to abstract expressionism to transcendentalism. Nonetheless, this community was vibrant, serious, hardworking, and like-minded in their drive to move away from romantic depictions of the southwest. They ate, lived, and breathed art (and often not much else—the Moderns famously struggled to make ends meet), spending their days creating art and their nights discussing it.

The Taos Moderns are also noted for including some widely recognized women artists, like Beatrice Mandelman, Louise Ganthiers, Janet Lippincott, and, of course, Agnes Martin. This is a stark contrast with the Taos Society of Artists, which included only one woman! Many photographic portraits of the Taos Moderns were made by another formidable woman artist, Mildred Tolbert.

The era of the Taos Moderns lasted until the late 1960s with artists like Michio Takayama, a recipient of a Wurlitzer Foundation residency, who proclaimed that “Taos is Best!” for its beauty and ability to inspire.

Visitors to Taos today can appreciate the influence that Taos had on the Taos Moderns mentioned here, plus many more, by visiting the following collections:

The Harwood Museum of Art

Founded in 1923, the Harwood Foundation was at the epicenter of the Taos Moderns movement. It was the home of the University of New Mexico Summer Field School of Art, and some of the artists even lived on the property. Today, the Harwood Museum holds a large collection of work by Taos Moderns, including an exceptional collection by wood carver Patriciño Barela. A rotating selection of their permanent collection is on view, and frequent special exhibitions feature work by the Taos Moderns as well. The Harwood also has a permanent exhibit of work by Agnes Martin; the gallery was envisioned by Martin herself, right down to the benches on which one sits to admire her work.

Open daily by appointment, including weekends.

Although a member of the Taos Society of Artists, E.L. Blumenschein incorporated modern influences into many of his later works. The Blumenschein Home and Museum holds an excellent collection not only of Blumenschein’s own work and that of other Taos Society of Artists members but also a number of Taos Moderns and their contemporaries, such as Howard Cook, Ward Lockwood, Barbara Latham, and others. The museum is located in the Blumenscheins’ former home on Ledoux Street, which remains much as it was when the family lived there in the early to mid-20th century. 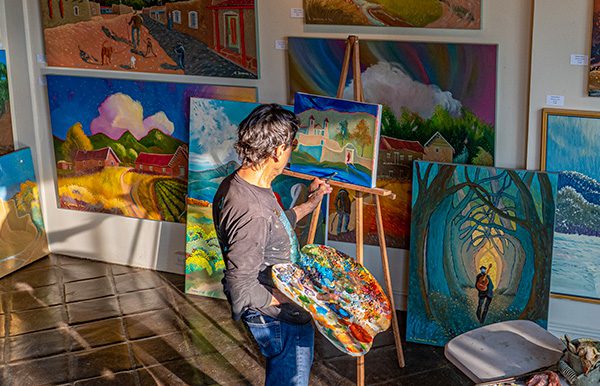