EVENTS AT TAOS PUEBLO ARE CANCELLED UNTIL FUTRTHER NOTICE

Members of Indian tribes throughout the country gather in Taos to compete in traditional dance competitions. Crafts booths and food vendors ring the pow wow circle during the three-day event.

The Taos Pueblo community is very proud that this widely attended event achieved a very significant milestone of 33 years in existence in 2019. There are only a handful of pow wow’s in the United States that have reached this mark.

A pow wow is a gathering of Indian Nations in a common circle of friendship. Indian Country is made up of many tribal nations, bands, villages, and pueblos, each with their own traditional tribal beliefs and practices. A powwow is the common fiber which draws Indian people together. It is a time for sharing with old friends and making new friends; a time for singing and dancing. It is also a time for trading — trading craft goods and trading songs.

Originally, Indian tribes held celebrations to commemorate successful hunts or harvests. Many tribes had ceremonial dances to prepare for war and to celebrate victories. The old tribal War Dance as it was known and is still called today, evolved over the last four or five decades into a contemporary social dance and the pow wow into a social gathering and celebration time.

A pow wow usually begins with a Grand Entry of the dancers. All participants dance into the circle in their respective categories, led into the arena by a tribal elder or veteran carrying a staff of eagle feathers. The eagle feather staff is the universal symbol and “flag” of Indian people throughout North America. When all dancers are in the circle in their respective categories, a flag song or the national anthem of the Indian people is sung, followed by an invocation by a tribal elder. Then the dance begins with intertribal dancing. This is a time when all dancers, competing or not, can “strut their stuff” displaying their best dancing abilities.

Excerpted from AROUND THE DRUM, by Richard Archuleta, Taos Pueblo 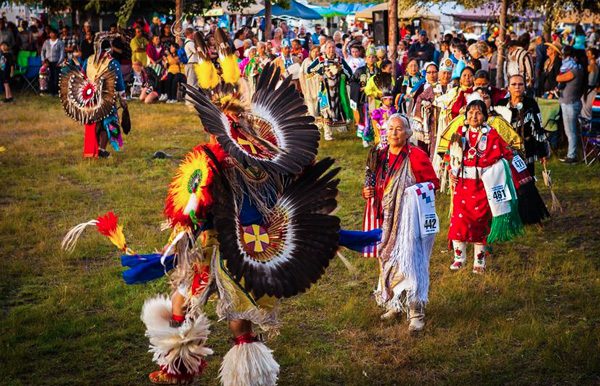