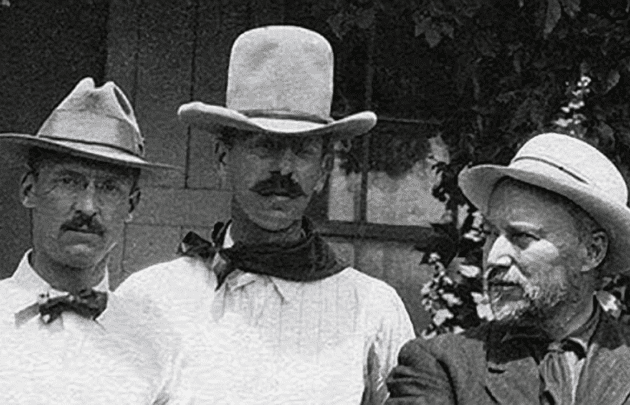 Taos, 1915: Six artists formed an alliance – Taos Society of Artists – which would transform the northern New Mexico village into a world-renowned art colony. But the story begins in 1894 when three American artists met in Paris at the Academie Julian. There began a series of events that soon altered the history of Taos, 5000 miles away. That evening, the younger two artists, Bert Phillips and Ernest Blumenschein, 20-something-year-old art students from New York, listened with what one can imagine being life-changing awe as 35-year-old Joseph Sharp told them about the landscape and native peoples of Taos, New Mexico. Sharp’s stories were based on his travels through New Mexico in 1893. He was an Ohio-born painter trained in the best art schools of the day – in Antwerp, Munich, and Paris, where he met Phillips and Blumenschein. The three young artists were intent on using their academic training to define a new American art form. They envisioned a “Real American Art” based on uniquely American imagery and Native American symbolism.

Four years later, in 1898, Blumenschein and Phillips discovered for themselves the beauty and mystique of Taos. Phillips immediately settled in Taos. Blumenschein visited every year before moving permanently in 1919. Sharp returned to Taos often, making it his home in 1908. By 1915, six professional artists from the East had made Taos the focus of their work. After founding Taos Society of Artists that year, they began sending circuit exhibitions of their paintings across the country and exposing audiences to new cultures, new visions, and a new landscape. This put Taos “on the map” as an art destination, making it one of the most important art colonies in America. It is today one of the oldest art colonies still in existence. Taos Society of Artists lasted until 1927, by which time there were 12 active members: Bert Phillips, Ernest Blumenschein, Eanger Irving Couse, Joseph Henry Sharp, Oscar Berninghaus, and Herbert Dunton were the original six, later joined by Julius Rolshoven, Walter Ufer, Victor Higgins, Martin Hennings, Kenneth Adams, and Catherine Critcher.

Prompted by the reputation of Taos Society of Artists and later enhanced by the presence of socialite and art patron, Mabel Dodge Luhan, the Taos art community expanded rapidly and with amazing diversity. From the post-war modernists and the Wurlitzer artist-in-residency program attendees. Taos has also fostered the likes of RC Gorman and the contemporary native art movement, and recently the practitioners of new media, digital arts, film, and glass arts. Today Taos remains a vital and ever-growing artists’ milieu.